The City of Berlin 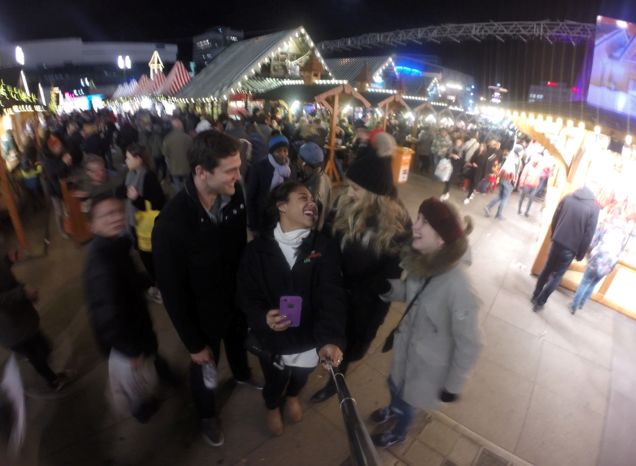 Berlin….eh. I’ll admit, it wasn’t my favorite city; however, the trip itself was A LOT of fun.

The transportation system was very confusing and the spread-out city itself I wouldn’t say was breathtaking. Historical: summing up Berlin into one word. Due to my finals I missed a day with the crew to see some of its greatest museums. I DID get to see the Sachsenhausen Concentration Camp located north of the city, which is about a 30-minute train ride. After some questions and confusion, Emily, Meg, Cory and I finally found the right train to get us to our destination. Talking our lives away and laughing, it was our luck that we missed our train stop. Completely blown and defeated, we got off at the next stop. Instead of getting mad at our slight sidetracked route, let’s just say we made the most of it and arrived at the camp in a decent time.

Growing up, I’ve read and seen films about the Holocaust and visiting a concentration camp was the number one thing I wanted to see in Berlin. Witnessing the camp in person was heart breaking. Reading about each persons’ story and learning about the tragedy that occurred in the camp makes one wonder: how and why? Jewish victims slaving their lives away for torture and starvation churned my stomach. Thinking about it, I truly believe in the infamous quote on how learning about the past is a great way to prevent history of repeating itself.

Although the plan was to visit the Berlin Wall after, the insightful time spent at the camp took the day away. So, we made our way back to Alexanderplatz for the Christmas markets. Christmas is the best time of the year…at least in my opinion. Walking by each vendor, wide eyed gazing at the variety of meats and deserts along with the small trinkets, reefs and Christmas lights latching all over the market was an incredible feeling. This year, it was a little tough getting into the spirit but coming to the markets definitely helped. Stuffing my face with a sausage sandwich and sipping on some deliciously-good hot wine, the crew decided to go on a Christmas present adventure.

None of us had bought Christmas gifts for each other by this time, and we all agreed to do a little secret Santa on Christmas Day. Meg and I went first. Given 20 minutes we bought our presents for our assigned person. Emily and Cory went after. Waiting impatiently, 20 minutes go by. Meg and I were confused as to why our other two Victory Scholars were not back yet within the allocated time. Frustrated, we hurried out to get some deserts. Within our journey, we spotted Cory and Emily buying deserts. Confused and annoyed that we were waiting for them for so long while they were out buying deserts instead of gifts we gave them a little steam. Laughing at the altercation, they scurried off and finally bought their presents while Meg and I decided to gorge on German cookies.

We had already accomplished so much in one day yet laughing nonstop at each other – I knew this Europe trip was going to be the best ever.