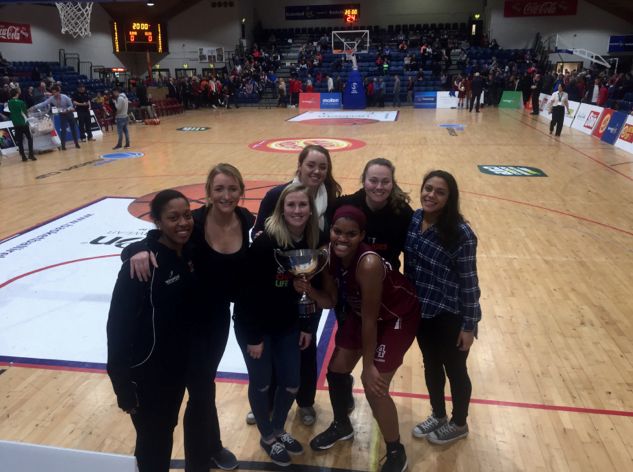 One thing I miss about playing college basketball is being around basketball all the time. Games constantly going, watching game after game…I miss it, especially the crowd and atmosphere of a game down to the wire. Luckily, this weekend called for great basketball in the country of Ireland – The National Cup games. Varying from ages and divisions, basketball was nonstop for men’s and women’s.

Without any hesitation, I booked my ticket far in advanced to see what the hype of this weekend was about even though my team, the Wildcats, were knocked out of our division’s semi-final game against Killester. Although the cup game results didn’t work out in our favor, Galway Victory Scholar, Marritta Gillcrease, outlasted all of the scholars in the cup tournament where Rita and her Galway Mystics survived to the final game. What’s better than surrounding yourself with good basketball is the idea of watching a friend go out there and kill it on the court.

Not only did I have the same mentality to watch the cup games, but many of the Victory Scholars were thrilled too! A small Scholar reunion with the Dublin, Trinity, Limerick, Galway, and Belfast Scholars made that weekend that much more exciting. Hanging out with a crew of people that had no idea of one another until we landed in Ireland, then becoming a big family supporting the play and game success of another Victory Scholar has definitely made my Irish journey priceless.

In case you didn’t know, Rita’s team KILLED it in their final cup game and my girl easily had a triple double representing the Scholar squad well. I’m proud that one of the scholars earned the rights to say they’re a cup champion!