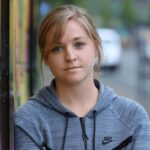 I never thought I’d know what it would be like to feel famous until the launch party for SCL. Coming into New York, I had no idea what to expect. It really didn’t hit me until we got to the Nike headquarters that all of this was real. I was sitting in a conference room for a Q&A with Rory McIlroy when I finally just had to ask myself, “How the heck did I get here? Of all people?” Then I wondered, “Crap, should I ask him a question?” By then it was too late. We were off to the races, heading toward the long-awaited party area. I scrambled to find my mom and my best friend, both of whom were sweet enough to accompany me to the event.

The event itself was a blur of lovely speeches and applause and cameras. Before leaving the venue, all the victory scholars received gifts from Nike and Bose. Since the moment we’d heard whispers of a “gift bag” from Nike, we all tried guessing what it could possibly be. At absolute best, we thought shoes. So when we did get the bags, we were all like little kids on Christmas morning when we opened it to discover not only shoes but an awesome jacket and speaker as well. Personally, my “shoe game,” as some would call it, is terribly weak because my foot is the size of a small child. I needed these shoes in my life. Thank you, Nike. Wow.

The rest of the night was bittersweet. I was emotional because it was the last night I’d spend with my mom for quite a while, but I was also really excited to get to know some of my fellow Victory scholars. When one chapter in life ends and another begins, I never know how to feel. It’s incredible to have the opportunity to live abroad, but it’s not fun leaving behind everything that’s ever been comfortable to me. While saying goodbye to everyone and everything I know in the states wasn’t easy, I couldn’t think of a better night on which to end my chapter there. Time to start a new one in Dublin!