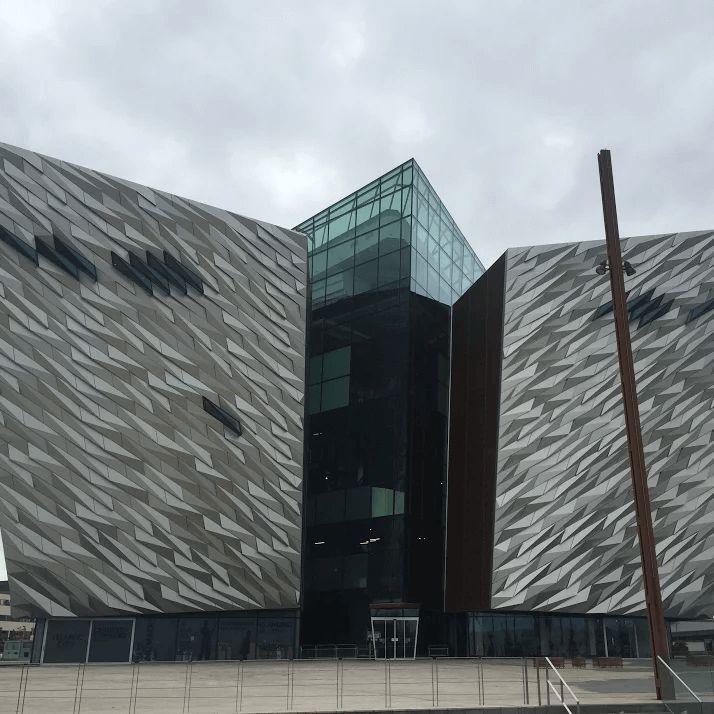 As we wrapped up our week of training at Ulster, the other Victory Scholars and myself were taken on a tour of Belfast by our very own Marc Mulholland and Aimee Shiels. We were taught about the sectarian issues, how it relates to parts of the city and the progress that has been made. Having a Catholic upbringing with roots in Ireland I found all of the conflict and history behind it wildly fascinating. As you may have seen on some of the SCL social media (@sportchangeslife) we took some pictures along the Peace Wall, I also took a time lapse video (below) while I walked along the wall however be warned it is a lot of colorful artwork crammed into a short video so it can be a bit disorienting.

We also had the chance to visit the Titanic museum and see the original site where the legendary ship was built. For me this was uniquely timed as I had recently read a book by Erik Larson titled “The Devil In The White City” (would highly recommend) which has a chapter that discusses the famous painter Francis Millet and his unfortunate ending on the Titanic. To see his name amongst the other 1,503 who perished in the tragic accident was extremely moving. As we stood outside the massively ornate Titanic museum Marc said something along the lines of “[This museum sums up the Irish spirit to turn a tragedy into something good]” This stuck with me because it is something I have always tried to do in my own life, take whatever situation you have been put into, whether good or bad, and find the way to make the best of it.

After arriving in my new home of Letterkenny in Co. Donegal it was only about 48 hours before I set out to see more of the Isle. Fellow Letterkenny Scholar T John and I hopped a short 4 hour bus down to Dublin to see what everyone has been talking about. After meeting up with Victory Scholars Kelsey Ellis and Jess Porter, T John and I took to the streets to explore. Though Dublin was quite diverse and felt more like an American city than Belfast or Letterkenny it was great to see some of the main attractions we’ve heard so much about. After a quick tour of the Guinness Storehouse and a stop by St. Patrick’s Cathedral we continued to explore the city with no set plan. I’ve learned that the best way to take in the sights is to just go outside and figure things out from there. The architecture and stone work throughout the city blew me away, we were lucky enough to get a beautiful sunny day to sit outside a Grafton Street cafe and do a bit of people watching as well. The energy and vibe of Dublin was very unique as most people seemed busy with places to go but at the same time relaxed and content. I will definitely be back sometime in the not-to-distant future, however for now I have some exploring of Letterkenny to do, cannot wait to see what my new home has to offer.