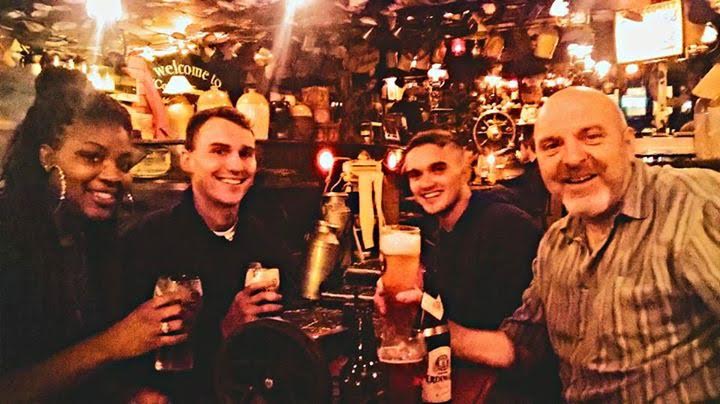 People have been inviting me places left and right, day after day, and usually I am a home body with the occasional adventure in going out, but I vowed to myself that I would experience as much as I could over these nine months. With that spirit in mind I will tell you about the time I went Irish dancing- and I actually liked it! A new friend I’ve made, Cullen, is also from the states. I was introduced to him through Gene, another victory scholar, and Joe, one of our community partners. It turns out myself and Cullen have become exploring buddies, but that’s not the point of this blog. Anyway, he text me one night saying one of the local coaches invited him to see some Irish dancing and that he could invite me as well. I was going to say no because I had school work to do didn’t think I would be into it, but I reminded myself of my vow and went anyway. It turned out to be awesome. Not only did two people offer to buy me the best cider I’ve ever had, but the dancing was very interesting. They did various sets to live music and I learned that the small group of people dancing had been going to the pub for years. They were all far into their adult lives by this time, but they met years ago in the pub doing this very kind of dancing and remained friends ever since.

When we walked in, we were asked if we were going to dance, but in no way was I having that- or so I thought. One cider later I was asked again, but this time she told us that there was a section geared specifically for beginners. That peeked my interest a little. I told her that I would consider it. About 15 minutes later she resurfaced and said there really wasn’t much to it. All I needed to do was be able to count to three. I began to do the steps and we laughed it off. She was relentless though. When she came back the final time, she led us over to the dance floor, and before I knew it I was being instructed on how to do the group dance. By the end of the song my face hurt from smiling so much. I ended up having a lot of fun and am even considering going back again next week. Who knows, I might even jump in there with the more experienced crowd. Lesson of the week. You truly never know what you’ll like unless you try it.