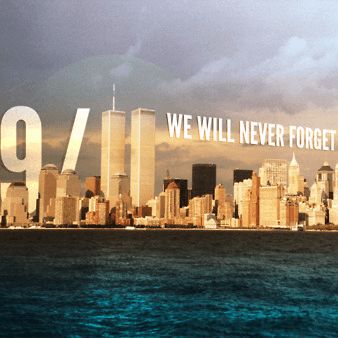 I can still remember everything about that day. It was a normal Tuesday, I got onto the school bus at the end of my driveway and headed to school under blue skies. From the second I stepped into school I knew something was up, teachers had a fearful look on their faces that someone of any age could understand. A fellow classmate who came in late to school said there was an “accident” in the city. Mumbling and panic began to spread over the room. Students were getting picked up by parents, police officers were filing into the school,  confusion was the only certainty of the moment. Shortly after I would return home and to this day I can vividly remember everything about walking through my front door. My parents and siblings crowded around the television with the same horrified look that my teachers had. Still unsure of what exactly was going on, having all these insane imaginary scenarios in my head, my daydreaming was broken my mother asking “Do you know what the World Trade Center is?” I was about to turn 8, I was in the third grade and I thought I knew everything. I looked at her and said “yea?” not wanting her to know that I really didn’t know. Then I looked at the tv to see what I knew as the “twin towers” collapsed to rumble and fire on the Manhattan streets. Being born and raised in New York of course I knew the twin towers, being 8 years old I was amazed by their size and stature, but right in that moment I just didn’t understand. Coming from a town filled with FDNY, NYPD and other NYC commuters, the next few hours were filled with frantic phone calls to friends and family members to see if they were alive and safe. Unfortunately for many New Yorkers those phone calls rang with no answer. In the days following the world would come to understand the unfathomable occurrences of that day, September 11th, 2001. How a group of human beings would act in a way to kill over 3,000 of their fellow human beings, no one can really understand. As the years went on the slogan “Never Forget” would become the moniker to remember all those who perished from the events that day. However I believe that phrase is a great reminder of something else.

Throughout history there has always been repeated occurrences of human on human violence, some that we may never understand the motive. We often remember these horrible events and those who were the driving force behind them; the terrorists, the murderers, the ones who caused harm on so many. What we often forget in the wake of these tragedies is the swarms of people who rise up and unite to help push past the atrocities. In the world of physics Newton’s third law states “for every action there is an equal and opposite reaction.” Fortunately for humanity this can be untrue outside physics, sometimes that action causes a greater and more powerful reaction, not an equal one. For every horrible act caused by humans there are many brilliant and beautiful responses that show the true character of human beings. Let us not harp on those who intend to drag society down but rather illuminate those who set out to raise the standard of hope and love, for they are much greater in population.

I choose not to remember the few that caused the damage on 9/11 but rather those who came back the next days, weeks and months to clear the rubble, assist the injured and lend a collective shoulder to cry on. As the 15th anniversary of that fateful day approaches let us remember not only those we lost but also those who united and showed that hatred does not cease by hatred but only by love. It is this that we must “Never Forget.”

Though I am enjoying every second of being over here in Ireland, today September 11th, my heart is back home in New York mourning those we have lost and remember those who responded in the face of danger.