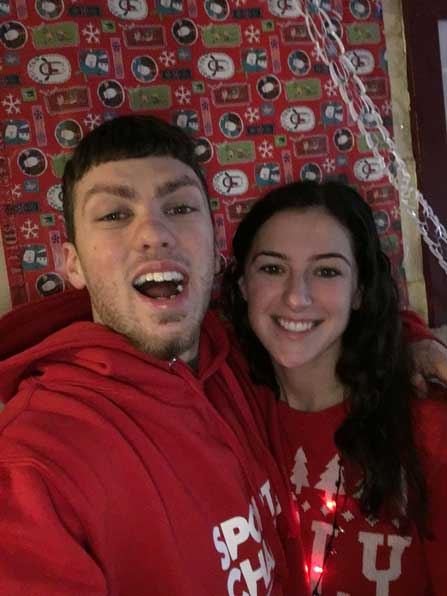 This year, as I mentioned previously I had the opportunity to spend my Christmas in Ireland. Although I did miss my family during these exciting times, I was able to spend the holidays with my girlfriend, Tara. Having her come all the way to Ireland is something I’ll be eternally grateful for, as she made Christmas in Ireland an unforgettable memory.

In the beginning of this week when Tara first flew in we decided to stay in Dublin for a few nights. It was my first time experiencing Dublin and it was a shocking one at that. Going from being in Limerick, which I thought was considered to be a major city in Ireland, to Dublin made me feel like I was back in New York City. The city has a buzz to it like nothing you’ll see anywhere else in Ireland.

In Dublin, I was able to take a trip to the Guinness factory, which definitely lives up to the hype everybody gives it. It is an amazing place in itself, as there are numerous amounts of floors in the building, each with its own type of appeal. One of my favorite areas was the top floor of the factory that consists of a sky bar with glass windows surrounding the room, allowing people to see all of Dublin from a high vantage point.

While in Dublin, me and Tara were able to take a tour to the Wicklow Mountains. If anyone is ever traveling around Ireland in that area, I would definitely suggest that this be a point of interest. The scenery in this area was unbelievable, and the ability to explore the area made it even more intriguing. There are lakes that lie between the mountains and while we were there, which happened to be December 22nd, there were some people actually swimming and kayaking in the water. Safe to say the weather at Christmas time is a bit more enjoyable then it would have been at home.

Being able to travel around Dublin and having Tara come all the way from Staten Island to visit me for the holidays definitely made my Christmas in Ireland one I will never forget.