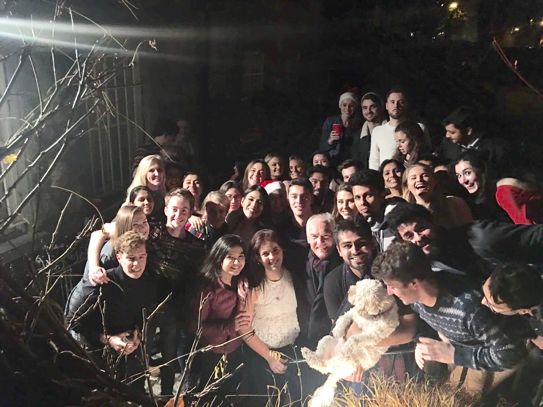 The only thing standing between me and my holiday break at home was exams. But as soon as they were over, it was like I was flying on the wings of a turtle dove off into the carefree world of Christmas. The same night that exams ended, I had a night out on the town with my classmates. It was the first night that I’d been able to hang out with them as a group because I’m always either busy with training or coaching. It was the perfect end to a tough week of exams. The perfect segue to my two weeks at home.

After spending that fun evening with them, I’m almost even excited to get back to class to be with them some more! I’ve been pretty lucky to have such a cool group of kids in my class. I’m still sometimes in shock that I’ve been hanging out with students from all over the world. I had a long conversation with a guy from Paris who was telling me all the hot spots to go when I visit France with my mom in May. I’ve also got a friend from Germany who’s invited me to come stay with her for a weekend after school ends (she also has a house in Spain that we’re going to go to… Casual!)

I regret not being more social this past semester, so now I’m motivated coming into the spring. I’m always tempted to sit alone in the back of the class—I’m a little too introverted sometimes. But my challenge this semester is to sit in new spots every day and actually speak to whoever I’m sitting near. That would be a huge feat for me. So here’s to resolutions and new semesters with new friends!