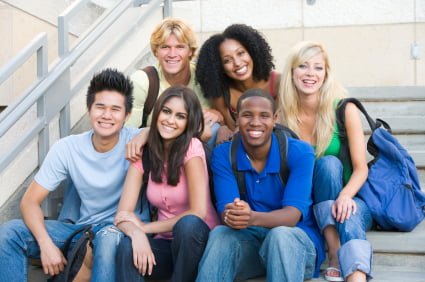 We have all seen it, the college brochure with 4 people of different races and ethnicities laughing in some aesthetically pleasing natural setting. Colleges and universities worldwide use diversity as a selling point of the 'well rounded' experience they seek to provide. However what kind of diversity are they promoting? Is it a diversity of appearance (skin color, ethnicity, etc.) or is it a less outwardly apparent diversity of thought (ideology, beliefs, etc)? Personally, I believe institutions, educational and otherwise, who seek to promote diversity would say they hope for a mix of both, but understand that in terms of a brochure picture it is easier to represent diversity of appearances. This brings up a crucial discussion of what diversity means. So often humans believe that a group of similar looking people will have ideas as homogenous as their appearance. It is the basis of the stereotyping and profiling nature of our society. However many times we see people of the same skin tone belong to a different religion or vote for a different political party. The adage "never judge a book by it's cover" comes to mind when attempting to explain this diversity of thought. Just because one woman may look like another does not mean they should be grouped together as like minded people. However it is the nature of the human brain to create shortcuts to allow the mind and body to operate more efficiently. The brain likes to compartmentalize and categorize what we see so that upon revistation of the subject it can quickly form an opinion to make a decision. It is by this reason that humans who lived before the scientific age could understand which plants were poisonous or safe and which animals were a friend or foe. When dealing with basic human survival it is an important skill to be able to quickly categorize and recall information on the world around you. However it is when we apply this generalization and grouping to fellow humans that this ability becomes dangerous.  In today's world we would be better served as a species by re-wiring our brain around these shortcuts and making our judgements based off the content of one’s character.

It is important to understand that what we believe about the world and what the world believes about us are not mutually exclusive. To this respect, those who look the same may often have similar thoughts because they have had similar experiences of how they are perceived by the world based on their outward appearance. It is a chicken and the egg scenario. When people are grouped by their color of skin and treated a certain way, it creates a shared experience between that group of understanding how the world around them responds to someone of their skin tone. Due to this, that group may develop similar ideologies which in turn cause more people to believe that all people of that skin tone have the same ideas. This is why we equate diversity of appearance to diversity of thought. While in some cases this may be true, often times (and particularly on college campuses) it can be said that though the population may look quite different from one another, they all think the same.

Studies show that there is a negative correlation between diversity (in this case meaning of observable characteristics) and social trust. More simply put, when a population looks dissimilar from one another, they trust each other less. Now is this because we assume that because we look different, we may think different? Or is it a more sinister development of a "them vs. us" mentality where one decides that neutrality does not exist, i.e "if you are not for us you're against us?" This is where, I believe, the importance of sport becomes undervalued. In a world where we have statistically proven this negative correlation between diversity and trust, we are constantly shown examples of rebuttal by teams who have an incredible amount of both. In America we have countless examples of members of different races and religions bonding over sports. This is because sports provide to us a shared sense of purpose, a common goal. When we join together to achieve a common goal it does not matter the color of your skin or which political party you support, only what you can do to help reach those aspirations. So it is time to ask ourselves as a country and a people, what is our common goal? Are we more focused with personal wealth accumulation or raising the standard of society as a collective? Would we rather become more divided or promote a greater sense of acceptance? Whatever that common goal is, we need to begin to come together to achieve it, because in these increasingly divisive times we should follow the example set out by sport and realize that regardless of how we may look, we can all be on the same team.