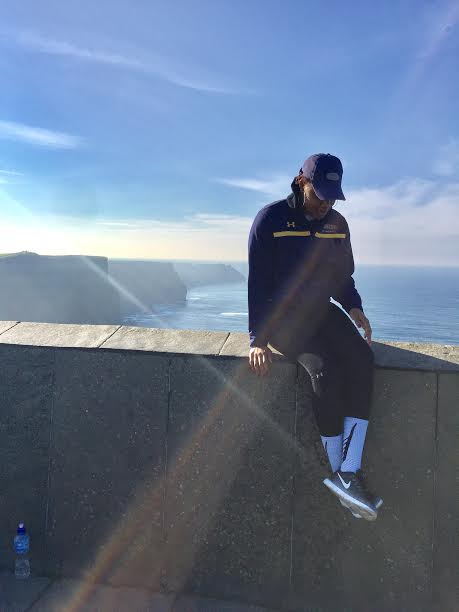 When people back home found out I would be coming to Ireland they were ecstatic. When they found out I was coming to Galway there were even more thrilled. Everyone kept telling me how beautiful of a place it was and how much I would enjoy the scenery. They convinced me that I really was in the best place Ireland had to offer. I wanted to make it my mission to do as much traveling and getting around as I could since inner country and European travel was relatively inexpensive. The first weekend we had off from games I took advantage of just that.

My teammates Hannah and Brittany, as well as two other scholars, Brittney and DaLacy, all went up to explore the beautiful Cliffs of Moher as well as the Aillwee Caves. The experience was breathtaking. I don’t usually do outdoor activities like walking along caves, or even in them for that matter, but this whole experience is about trying new things and getting comfortable with being uncomfortable. As I mentioned in my last blog, getting comfortable with being uncomfortable simply means that I am ok with growing and stretching myself to be better.

The first stop in our trip was the Aillwee Caves. We took a thirty minute tour through them where we learned about their history and the man who discovered them. We walked by waterfalls and natural formations that took more than hundreds of years to form. There were a couple times where we had to slouch down to make it under part of the pathway, and we even got to experience the cave in its natural light- which is really pitch black. The experience was new, exciting, and something I wouldn’t usually do, but I’m glad I did.

The second stop in our trip was the Cliffs of Moher. Being there was breathtaking. There were beautiful formations that were naturally made. The waves hitting the bottom on the cliffs were beautiful, and I even sadly learned that a lot of people go there to commit suicide. I wasn’t brave enough to go and sit at the edge of the cliffs, but I did get close enough to where I could take a picture and look down, which is also something I would never have done before. Being there just made me appreciate life and nature that much more.

Once we left there we ended up going to get food at a small, family owned, seafood place. It was nice to sit and talk to people who experience the same things as me on a daily basis, and in some cases more. It helps me realize that we are all on the same ship, even if we are on different levels at times. Nature has a way of making you reflect and appreciate life no matter how scary it may seem at first.