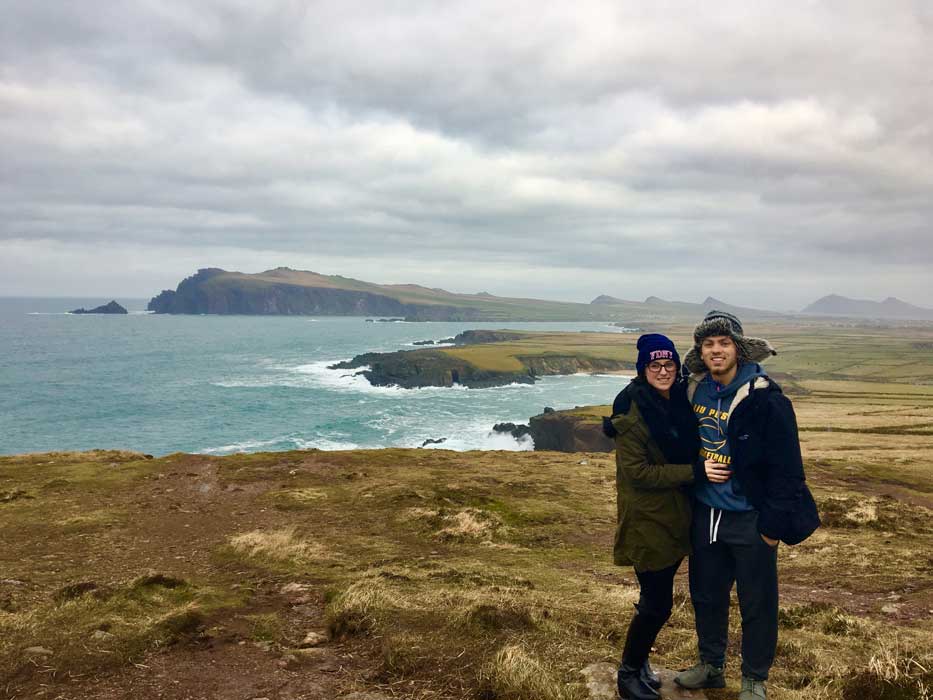 It is officially 2017! It is a new year for everyone! Luckily for myself, I was able to spend my time bringing in the new year in Dingle. This was the experience of a life time for both myself, as well as my girlfriend Tara. If I would suggest checking out any area of Ireland, both in general and for New Year’s Eve, there would be no doubt in my mind that Dingle is the spot. We arrived on the 30th, and were able to spend two great days and nights there. The first day we were there we were fortunate to get a personal tour around the whole Dingle peninsula, and as told by our tour guide, National Geographic christened it to be one of the nicest places on earth. They definitely were not lying. The sights seemed unreal. We were fortunate to have a tour guide who had quite some knowledge on the area, being a resident his whole life, and he knew just the right places to stop and make the journey life-changing. Areas around the peninsula can’t be justified by words; I would be doing it a disservice if I did so. New Year’s Eve in Dingle was happening to say the least. For a small town with a population of only 1,500 people, the streets and pubs had to be filled with over 3,000 people. The atmosphere was electric, as the streets were pedestrianized and a firework presentation emerged over the Dingle bay just about an hour before midnight. Leading up to midnight, pipers and drummers paraded around the town, arriving back at a central location where the countdown then began. When the countdown reached ‘0’, 2017 was officially in effect. Almost all 3,000 of the people in town that night then paraded around the streets alongside the pipers and drummers, finalizing an incredible end to the great weekend it was.

Everyone has memories of 2016. The ups, the downs, and everything in between. Whatever it may be, don’t let whatever has occurred in the previous year affect how you approach this one. Don’t let failures defeat you, and don’t let success go to your head. Nothing is permanent. Take the time to re-focus yourself and prioritize the things that truly matter to you. Create new goals, new challenges, things that are going to help create a better ‘You’.

Never settle for average. There is always an area of your life you can improve. Don’t become content or believe it’s too late to change.

Make 2017 an unforgettable year. Make it the best year of your life!