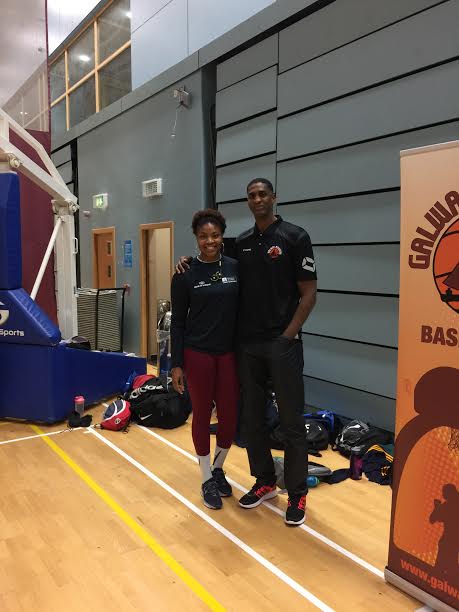 A couple of weekends ago the Galway Master’s was in town. Now where I’m from the Master’s is a big golf tournament, but I soon found out this was not the same thing at all. It was a weekend we were off from basketball, so we were set to work a few games Saturday and Sunday. Friday there was a camp to be on that was ran by Tim Rice, who is a basketball guru. He worked with various levels of college basketball for a number of years and now he is a sports psychologist who goes around blessing teams and coaches with his knowledge one day at a time. Myself, my teammates, and Charles Smith (former NBA star) all worked together to impart knowledge to a large group of young people.

Saturday rolled around and it was the first round of games. I have never seen so many people over the age of 40 (for men) and 35 (for women), come in and compete like they did. There were a good bit of teams involved, and they all gave me hope for the future. To say it was entertaining to watch was an understatement. All the same mannerisms, communication styles, and coaching styles I see at the level in which I play were present in watching them. I also got to watch Charles Smith as well as my own coach Mike Murray in action.

Saturday night we went to a 70s themed party with a lot of the teams who were participating in the tournament. The food was good and then the dance floor came alive. We did something called rock the boat where everyone sat in rows on the floor and rocked back and forth to a song. It was different to say the least but it ended up being a lot of fun. The costumes people had on were also fun to see.

Sunday was much of the same as Saturday. The teams were now playing for the championship and it was still just as competitive, if not more, than the day before. The games got a little more interesting and chippy, and I loved every second. By the time it was all said and done I was tired, but people were thankful for our help and that made it all worth it.

Myself and my teammate Brittany said that in 11 or 12 years when we are 35, we will definitely be getting a team together to come and compete. Scary to think we are so close to being there. As it turns out though, tournaments like this exist a lot of places and it’s very popular throughout Europe. I hope to be in as good of shape as the people I had the pleasure of watching when I get their age.