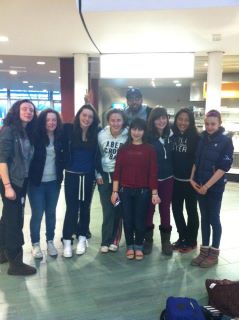 As always, it has been an event-filled week here in Northern Ireland. Hinted by the title, there were many opportunities to seize a second chance. The great thing about basketball which can also be pertained to life is that when given a second chance, it is very important that one improves if not succeed. Although there were various outcomes to the second chances, all were learning opportunities.

First, the Junior Elks U16 had a chance at redemption against the same Queens team that I mentioned to you last week that played a zone defense against us. This was a new game with an opportunity to prove to this team that we could contend with them. Instead, the girls retracted to bad habits and poor attention to detail which resulted in another loss to the same team. After the game, myself and the coaches explained to the girls that coachability was just as important to the game of basketball as being able to shoot the ball. To the credit of the girls, the came with a brand new attitude the next day in our game against Letterkenny and pulled out a decisive win.

Secondly, the Ulster Elks Premier League team was able to make incredible strides against two league opponents that previously beat us, both North Star and Tropics. Both games, as a team, we defensively took a stand which we had previously failed to do. The first meeting with the two teams we played lethargic defense that led to big leads for the opposing team. This mental toughness was not something we demonstrated at the beginning of the year, which shows that we have made postive strides and have seized the opportunity to improve.

As for my coursework, getting a fresh start in the second semester is like getting a second chance to do things differently. Although I thought I was very time oriented the first semester, there is always room for improvement. With a lot of my assessments due around the same time periord, I’ve decided to get an early start on them so I can individually focus on doing my best on each assessment.