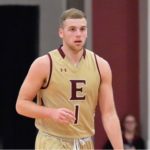 The Preseason has officially come to an end for the Ulster Elks club team. This past weekend, we traveled down to Carlow IT for a preseason round robin tournament. It reminded me of playing AAU games back in America because we played 3 games Saturday and 2 on Sunday. We ended up winning all 5 of the games, and left as champions with individuals medals and one pretty sweet looking trophy. The downside is, the regular season starts this weekend and that tournament, you guessed it, counted for absolutely nothing.

The good thing about this tournament is that we now have good momentum heading into the regular season. We got revenge on the Dublin Lions who beat us the week before and also got the best of some other Victory Scholars over the weekend. Also, Matt (The other American on the Elks) I and got our first experience of Ireland hotels and having 2 Lithuanians as neighbors. (Pictured Below)

It only took one weekend to learn that they are great guys and exceptional basketball players. Until next time, Lets Go Elks!