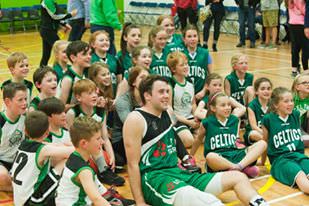 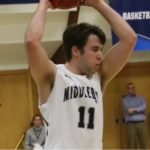 Last Saturday night was a huge night for the Limerick Celtics. It was the club’s first ever National League home game in Limerick. The club did a great job promoting an event, which led to a sellout crowd at LIT’s gym. We were able to pack people tightly throughout the small gym. This created an environment that was loud and fun. It was a great experience for our team to interact with the community. During halftime, there was a game between the u10 boy’s and girl’s teams. It was an incredibly successful first night, even though we came out on the wrong side of a close game.

After the game, our club had a welcoming party for Liz and I at a local restaurant. A bunch of our teammates, their families, and coaches all attended. We had some food, drinks, and they even got us a cake. It was a great night to meet people throughout the club, talk about the game, and Limerick in general. The club is full of great, supportive families that are so helpful and appreciative for the work that Liz and I are doing here.

This past Saturday, we also got our first win! We beat the Dublin Lions on the road 98-81. It was a huge win for us and many guys stepped up with big performances. After losing close games the first two weeks, it was a really important win for our team. Onto next week!