“Sometimes you will never know the importance of a moment until it becomes a memory.” 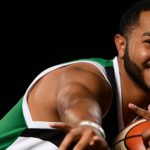 Just a little context before we get into the blog. I’m on my way up to Dublin with my college team to compete in a friendly game against a division 1 college basketball team. Yesterday after going to college in the morning and finishing some work for a group assignment I got picked up by this lovely woman named Sarah. Now Sarah is American but moved here about 15 years ago. I first met Sarah at a basketball game in St.Munchins College. One of my basketball games got moved to that gym because our roof was leaking. Anyway before playing my game I sat in the first seat I could to watch my fellow victory Scholar Taylor play against another Victory Scholar, Jamie. While I was cheering both of them on and talking to my teammates a woman next to me asked if I was American. I replied yes and she was like “yeah, I could tell by your accent”. This drew me in…because I felt someone was watching and noticing me. I ended up taking part in the conversation and found out she is originally from Connecticut, has two kids (Pearse and Deidre), and moved to Ireland 15 years ago. I told her all about Sport Changes Life and the work they do and how they are the reason I’m in Ireland. She had heard about Sport Changes Life but was nevertheless impressed by all the great work they do. I had to get ready for my game so I said bye for now and honestly thought I would never see her again. After this conversation I didn’t feel alone, I didn’t feel like the only American in Ireland adjusting to new life. Meeting her made me feel better about myself and my situation out here.

Fast forward about 5 weeks, during one of my coaching sessions, my Coach Mike brought myself, Taylor, and Matt out to Shannon to work with a group of U13 and U10 children. This group of children are so full of energy and love when we put these sessions on because they get to learn and interact with us Americans. So we usually have the boys first then the girls. So the boys all walk in and are shooting around and as I greet them all with high fives this one kid comes up to me and says, “Drew! You know my mom!” And to say I was caught off guard was an understatement. I was like, “what?! Who’s your mom?” And he said, you don’t remember? Her name is Sarah and you met her at the Celtic game in St.Munchins.” It took me a while to put two and two together, but after it hit me… he was the son to Sarah… SARAH the mom I met in St.Munchins… the one who knew I was American and took the time to talk to me. I told him, “Yes I do remember. She was so cool to talk too. She must be an even cooler mom!” He laughed and agreed and went on his way. Again I thought nothing of that encounter… I thought maybe that was the last time I was going to see that kid (Pearse) but I’m glad it wasn’t!

February 17th my national league team played Ulster University from Belfast. My coach mike has a great connection with the community in Shannon and invited 40 boys and girls with their parents to come watch our game. Our gym was packed. So many people, eyes, and kids were at our game. You could feel the energy in the gym. I’m warming up for the game and I see Pearse! We run over to each other and say hello and hug. He brings me over to his mom and we embrace each other. This encounter felt different from our first meeting. Granted, we were still strangers… but after that first time seeing Pearse at that camp Sarah added me on Facebook and kept up with my life here in Ireland with my pictures and constant updates. I kept up with her as well… and when we hugged – it felt as if I knew her my whole life even though we only met each other twice. We talked for a bit and I headed back to warming up for my game. The game was unreal, back and forth action, but we ended up losing 98-95. After our game we shaked hands with the opposing team and the refs, then immediately all 40 kids ran onto the court shooting their basketballs. It was time to move on from the game and run this camp with all the kids who came to watch our game. The camp was a mixture of boys and girls and we did drills that were fun and kept them moving. After the two hours we took pictures with the kids and I said goodbye to Sarah and Pearse.

Later that evening I got a Facebook message from Sarah inviting me over to her house for dinner.. ( side note, in America you don’t often get invited to dinner in another persons home unless you’ve known them for years – but I remember the packet I got when I first applied for Sport Changes Life had a list of tips from past victory scholars and one of the tips was that if you ever get invited over to dinner from anybody, just GO. It may be different, but it will be a new experience and something that will mean a lot looking back.) so I decided to take that into consideration with my decision and said yes to Sarah.

We arranged to meet the next day in the afternoon. After class, I waited outside my school where Sarah stopped by and picked me up. I put my bag in the boot of the car and was welcomed with a hug upon entering the car. Her children Pearse and Deidre where in the back excited as ever to see me! We were off to Clare about a one hour drive from where I live. We talked about everything from my life, to theirs, sports, and even college basketball. Usually when I get into a car I could be awkward and not talk, but this drive was just chill vibes. I didn’t feel pressure to say the right thing or think out loud. They weren’t judging me and I liked that. We eventually made it out to their house and I could slowly start to notice we weren’t in the city anymore. As we pulled up, Sarah jokingly said, “Welcome to our little farm.” Now I never been to farm so I was a bit hesitant, but I continued to remind myself of those tips from past victory scholars of just take in the experience when going to someone else’s house. So as I walk into the home, I could feel this place and was a place of comfort and relaxation away from the stresses of life. The lighting, aesthetics, furniture, pictures, everything was pleasing and cosy. I sat down and was offered a glass of apple juice – we continued with our conversations about college basketball and I came to find out how well Sarah and her family really knew American sports. They were naming players that I didn’t even know. As Sarah prepared for dinner, Pearse offered to show me the barn where the animals were. We put on our shoes and head outside, as we walk in it is dark and the lights aren’t on – I was greeted by a huge horse! I immediately yelled for Pearse where he peaked his head around the corner and said, “sorry I forgot to put on the light with a smirk on his face”. Later his older sister Deirdre walked with a commanding presence. We talked about the farm as they showed me their animals which were horses, chickens, and ducks. Come to find out Deidre takes care of the farm whether it is cleaning or feeding the animals and I thought that was so cool. For a moment I shared with both of them how different my upbringing was in America. Being raised in the Bronx you don’t often see animals or farms so all of this was just new and fresh for me to see. And to see how comfortable and “in their element” Pearse and Deidre was just a cool experience because I know kids back home that are their ages are having a totally different childhood.

After an hour of talking in the barn, we came back inside and sat in the dining room. I saw a wall full of board games and asked Pearse if we could play one. When I was child I used to loveeeeeeee to play a card game called “spit” but I forgot how to play because I never had siblings to play it with. Luckily for me, Pearse knew how to play! He showed me the set up and we began to play very slowly. I could tell he was taking it easy on me as I was getting adjusted. But I was determined to learn and get my “skills” back. Slowly I started to relive my childhood though this game having moments like “ahh I remember this!” Or “yes! This is how it goes!” We ended up playing the game for an hour – there was no winner because dinner was ready, but their were laughs, competition, and enjoyable memories I took away that I would never forget – thanks Pearse, you’re the man! Dinner was ready and Sarah made Chicken Parmesan . Her neighbors Mary Ann and Kimberly joined us for dinner as well. We said grace together and as the guest I took the lead. I never say grace in front of people, just because I feel it makes people feel awkward but for 2019 I made a goal to always say grace before eating. As I was saying grace and holding the hands of Pearse and Deidre I started to get emotional because as I was talking the thoughts of how blessed I actually was to be in the presence of such amazing people who took me in for the night just made me feel overwhelmed with emotion. That dinner wasn’t just food and people around the table, this was the moment I realized my time here really does matter and people are taking notice. A simple basketball at the age of 8 back home in the Bronx somehow someway brought me all the way out to Ireland at the age of 22 sharing dinner with people who couldn’t be more welcoming, undjudging, and just overall great people. To Sarah, Pearse, Deidre, Mary Ann, and Kimberly… thank you so much for dinner and taking me in for a night. It meant so much for me to be in your presence. I know that won’t be the last time we get together so till then #WinTheDay !