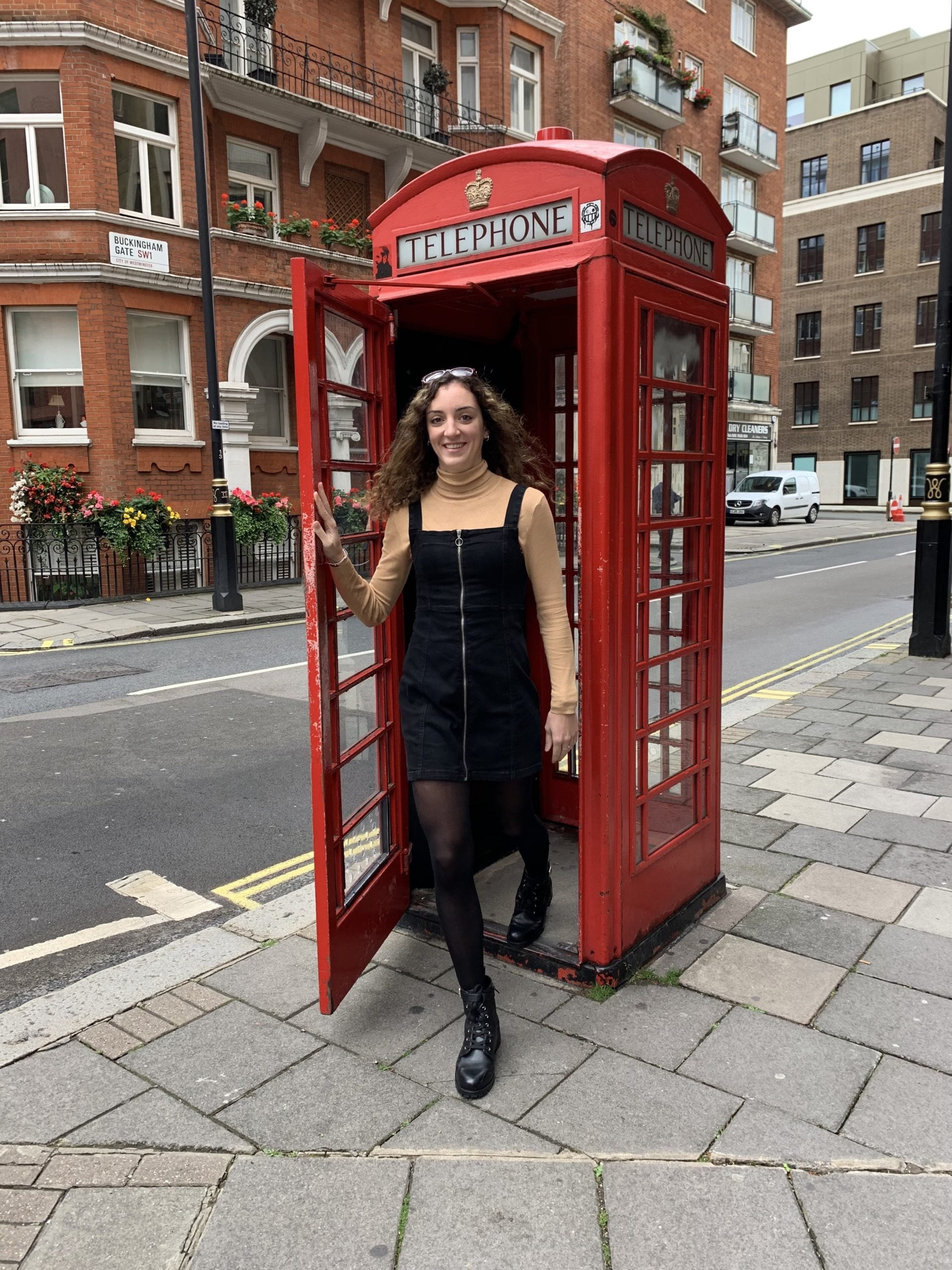 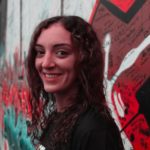 55,018 steps. 25.05 miles. That is how much ground we covered in just TWO (and a quarter) days in London, England! If we don’t win our “Walktober” competition at school after all those steps…I’ll demand a recount!!

This past weekend, we did not have a game or any other commitments until Tuesday night. So, Kaylee and I decided to take advantage of our time off and go on a little weekend trip to London! We booked super cheap flights through Ryanair (only an hour long!) and found a pretty reasonable Airbnb for our time there.

We left for Dublin airport via Buseirann in the morning (the longest part of our travels) and took off at 4:30pm for London-Stansted airport. Once we arrived, we took a coach from the airport to our Airbnb – which we struggled to find at first but eventually we made it! We were STARVING when we arrived, so we quickly put our things in our room and ventured out into the City of London. Now, I have to say that I’ve really taken the kindness of the Irish people for granted – we had to deal with some pretty rude people along the way and we were definitely not used to it. However, London definitely had more of an NYC vibe to it, which was pretty fun for me! So after aimlessly walking around searching for a restaurant, we came across a happening place called The Crosse Keys. This wasn’t your typical restaurant where you are seated by someone and waited on…we actually had to ask the bartender what to do because we had no idea! Basically, it was just a free for all – you look for an open table (which all had numbers on them), figure out what you wanted to order, go up to the bar and give your table number and your order, then wait for your food to be brought out by someone. Interesting process! After we finished eating, we walked on the London Bridge (which wasn’t falling down) and on St. Thames Path along the water before resting up for our next full day in Central London! 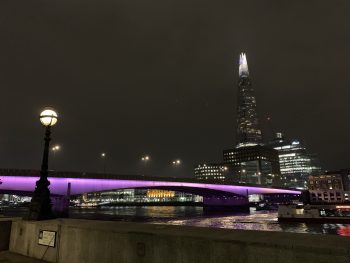 Besides a little wind at times, the sun was shining and the temperature was really nice on Sunday! Before heading to London, Kaylee and I decided we’d just wing it and kind of walk around and give ourselves a tour – and we ended up being some pretty good tour guides if I do say so myself. I actually had to start making a list of all the things we saw throughout the day so I didn’t forget!

Our first challenge of the day was figuring out how to travel using “The Tube” – which is basically the equivalent to the MTA subway/bus system in NYC (but a lot cleaner and more reliable!) We had to purchase “Oyster cards” which are essentially like NYC’s Metrocards, except you have to scan this card when you enter the station AND when you exit your destination station. I thought that was pretty interesting; maybe NYC should take some notes if they really want to try and reduce fare evasion! My New York experience definitely came in handy though – we traveled all around by train like it was nothing! (OK, I’ll admit we got on the wrong train just once – but that was the only time!) 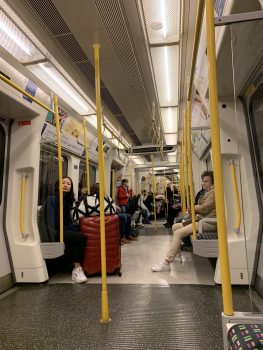 Our first tour of the day included Big Ben, the Houses of Parliament, and Westminster Abbey, which were all in very close proximity to each other. Unfortunately, Big Ben was almost completely covered with scaffolding – but it was still cool to see! The architecture of Westminster Abbey was absolutely stunning. Pictures don’t do any of these places justice, but they will have to do for now! 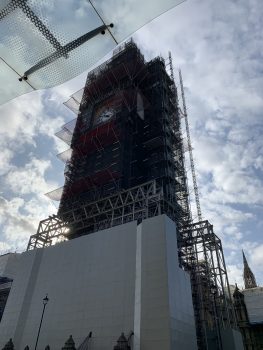 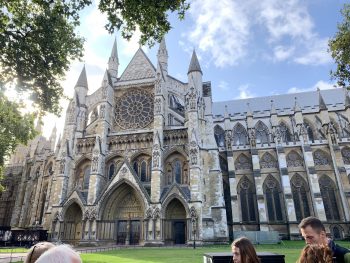 Then we continued to walk on towards Buckingham Palace. I guess my luck followed me to London, too because we got there just in time to see the changing of the guards! There were SO many people waiting outside the gates to see this take place. The whole time we heard the security officers yelling at people to keep moving and to watch out for pickpocketers! This immediately reminded me of the song from Oliver Twist, “You’ve Got to Pick a Pocket or Two.” My brother and I used to sing this song and pretend to go around pickpocketing each other when we were younger at my Mommom’s house, so it brought back some fun memories and nostalgia! 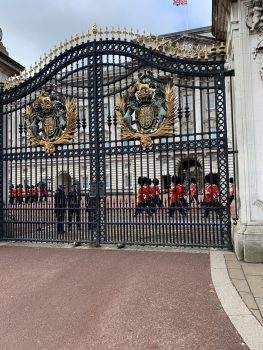 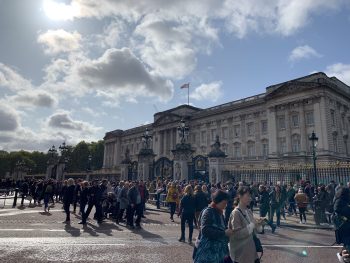 After the ceremony, we continued walking around the palace through some nice scenery and into Hyde Park. This park was beautiful! We walked through the Rose Garden, along the Serpentine River, and saw the Princess Diana Memorial. It was a really nice day to walk along the Serpentine, which was teaming with swans, geese, and the like. However, I have a small fear of being attacked by swans, so when I saw people trying to feed them or take pictures near them, I walked quickly past! 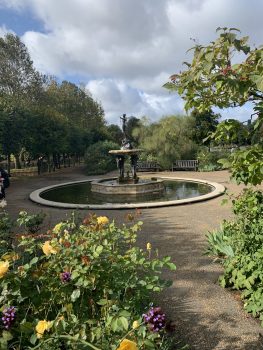 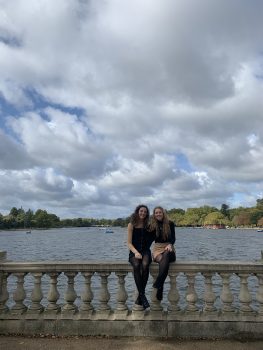 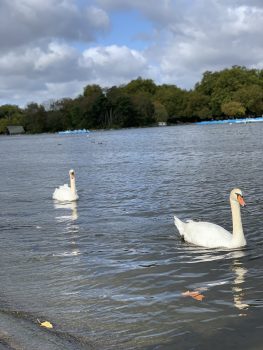 Then we had a little lunch break at a restaurant on the Serpentine, and after made our way to Convent Garden, which I would HIGHLY recommend to anyone visiting London! There were markets, shops, magicians and other entertainers in the streets, and just all-around good vibes. Of course, we had to splurge a little and buy ourselves a touristy gift, so we each bought London hoodies that we could wear on the way home! 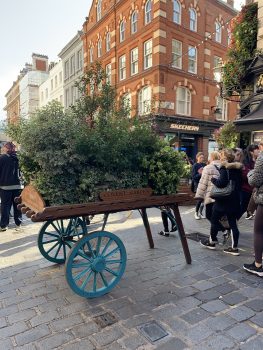 To end the night, we ended up walking down to Soho (also a really cool area, a lot like Times Square in NYC just less crazy!) and found a casino called the Hippodrome. The roulette tables had a minimum bet of £2, so of course I had to play! I put £20 down and stayed alive for a while with my conservative betting tactic (placing chips on corners or in between two numbers to increase my odds), but then they raised the minimum bet to £5…I could’ve walked away with a few extra pounds of profit but I was alright with losing the money so I just went for it to see what I could do. I ended up walking away with £2…but hey at least it wasn’t zero!

Then, Kaylee and I continued to walk around the casino and we noticed there were a lot of people walking around wearing different NFL jerseys. We asked the guy at customer service what was going on and he took us downstairs to our version of HEAVEN!! There was a bar and a few roulette tables in the room with seats lined up (like a movie theatre) in front of 5 or 6 big TVs that were all about to stream the Sunday NFL games!! It was a really cool environment once the games started because people were cheering, laughing, and having a good time watching their favorite teams play. Of course, I found the few Eagles fans there and bonded with them over our team! As I’ve written in my previous blog, Kaylee is from Boston and happens to be a Patriots fan…but we have fun with the little rivalry! Apparently, the Patriots game was being streamed on a different floor, so after watching the Eagles kick butt in the first quarter, we went upstairs to the room where the Patriots game was being played. They had a whole separate room JUST for the Patriots fans (typical) and the vibe was…BORINGGG but I was a good friend and watched the second quarter anyway😉 All joking aside, we had a really great time going back and forth between the games! Maybe we’ll get another Eagles v. Pats rematch in the Superbowl and venture back out to watch it at the Hippodrome😬

If you know me, you know I’m an “old-soul” when it comes to music. I used to say Frank Sinatra was my favorite singer when I was just a little girl! I love all the old school bands and musicians, like Bruce Springsteen, Billy Joel, and of course…the Beatles. So, one of my priorities on this trip to London was to see and cross the one and only, Abbey Road. And we did just that! We took “The Tube” out to St. Johns Wood Station and walked to the legendary crosswalk. One of the most entertaining parts of this was watching people cross the street and try to take pictures while cars were coming in both directions. The UK drivers don’t like to stop and wait for tourists at this road, so you have to walk across and get your photos quickly! It was surreal walking the same path as some of the most iconic musicians in history and seeing the place where such great music was made at Abbey Road Studios. I was definitely fan-girling! Then, we walked to Paul McCartney’s house (about 5 minutes away from the studio) that he bought in 1965 for £40,000! He still lives there today whenever he is in London, so I obviously had to ring the bell outside of the gate to see if he was home! Unfortunately he was not, but not many people can say they rang Paul McCartney’s doorbell, right? 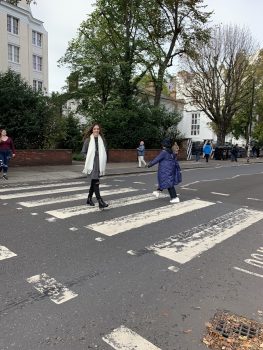 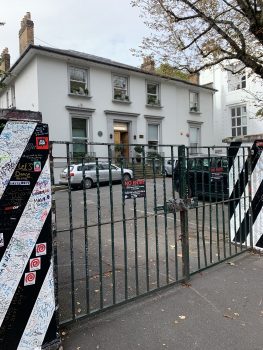 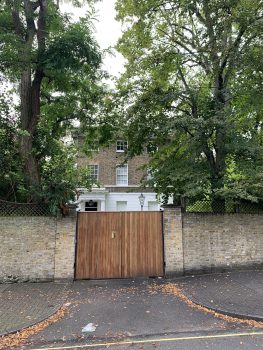 We also saw the London Eye and found a Nike store and browsed a bit, then bought cheap tickets to see the musical “Waitress” at the Adelphi Theatre in Covent Garden. Before our showtime, we decided to go near the theatre area and walk around to find a place to eat. Upon getting off the train, we found ourselves in the middle of a huge climate control protest! It was apparently a global 2-week campaign called #InternationalRebellion to demand that governments take action on the climate crisis. At least 217 protesters were arrested in London from this! I’ve never seen anything like it, so it was definitely an experience! Then we made our way out of the action and browsed the National Gallery museum and found a cute Italian restaurant for a nice meal before heading to the theatre and seeing a really good show! We walked back to our Airbnb after and saw St. Paul’s Cathedral along the way, which was amazing!! It was really a great ending to our “little” weekend trip. 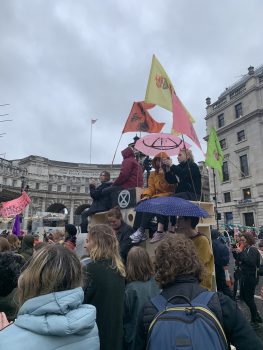 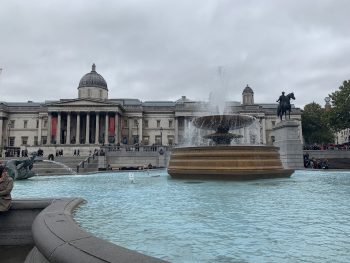 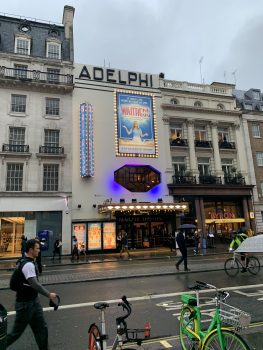 We were awake at 4am to catch a bus and train to London-Stansted airport and were back in Ireland by 9:20am! We were welcomed by a beautiful rainbow (pictured below) and made it back to good old Letterkenny by the afternoon. 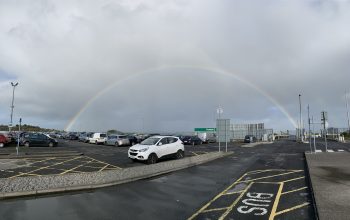 It’s amazing what we were able to see and do in just two days in a different country. I am so grateful to be able to travel and see new cultures so easily while living in Ireland and being a part of Sport Changes Life. I can’t wait to see what country we end up in next!

It is definitely worth it to buy and “top up” an Oyster card while you are traveling in London. HOWEVER, make sure to check and see if the train that Google Maps tells you to take requires you to purchase a ticket before riding. We took a train to London-Stansted airport to get on our flight home and were met by a man who was not very nice when we presented our Oyster cards to him after getting off the train thinking we could pay with them…He made us EACH pay a penalty fee of £38 for not knowing that we had to buy a train ticket beforehand! (Good news though…after a strongly worded email to the train line, we are getting fully refunded for our penalty fee!)