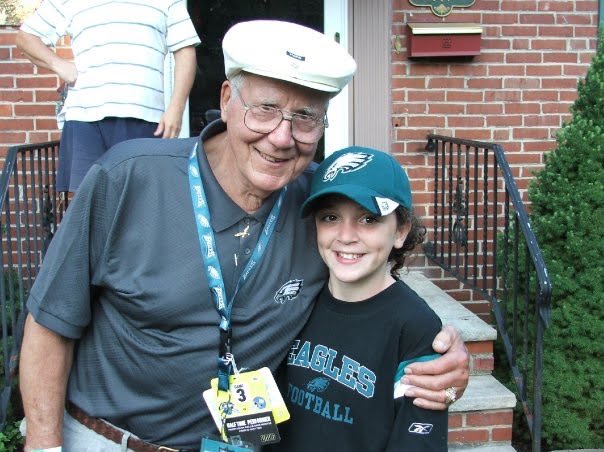 American football has always been a HUGE part of my family. My grandfather, Dan DiRenzo, played for the Philadelphia Eagles and was a member of the World Championship (now known as the Super Bowl) team with them back in 1948 and 1949. So that would be why we are such big Eagles fans!! See pictures below of the 1948-49 Eagles team (with my Poppop circled) and a picture of me and my Poppop before the Eagles’ Alumni game! 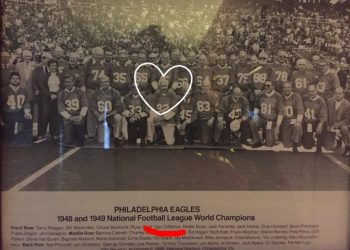 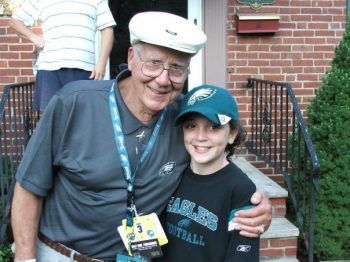 My father was also a great football player, but he chose to pursue baseball throughout college (and almost to the pro league if it wasn’t for his knee injury!) And of course, the current DiRenzo football player is my not-so-little brother, JD (my Poppop gave him that nickname when he was born). JD plays Division I football at Sacred Heart University in Connecticut as a left tackle. At 6’6″ and over 300lbs, he has started every game since his first year playing and is doing great for the Pioneers! I definitely miss tailgating before his games with my family and watching him play, but he still has two years left so I’ll get to see plenty! Hopefully one day we’ll be in a special family suite watching him play in the NFL😉

When we were little, we used to love playing football out in the backyard. My brother was a quarterback for some time, so I used to run routes and pretend to be a wide receiver so he could practice his passing. We used to LOVE summer nights like these, being outside with my parents (and eventually my little sister, Leah) playing different sports. They were some special moments that I will always remember!

Anyway, before I get too sappy, the reason I am giving some of my family background is because two weeks ago I had the opportunity to play football! However, this was not American football, but Gaelic football. Gaelic football is an Irish sport that basically involves different aspects of American football, basketball, soccer, and I’d even mix volleyball in there, too! It is played on an outdoor pitch and is definitely a high contact sport! Here is a link that quickly explains the basic rules if you want to know more about it: https://www.youtube.com/watch?v=vSOe-USZzok

I’ve wanted to try Gaelic since I arrived in Ireland, so I was really excited when my landlord, Ed, messaged me and said that a woman named Monica Gribben wanted to take me out to one of the training sessions for the “Gaelic 4 Mothers and Others” team. Monica lives here in Letterkenny and usually plays for the team but has been out due to injury. However, she was still so generous to pick me up and take me to my first Gaelic training session! I actually coach one of her daughters, Emma, on the Academy team (which will be going to Spain next year). Monica also has two other younger daughters that came along with me to O’Donnell Park, which is where the pitch was. Thankfully, Monica and I have the same shoe size so I could wear her spare boots (cleats), which even had nice insoles in them – important to get that good arch support! Her daughter, Kira, also let me borrow her gloves, so I was fully equipped for my first time out on the field!

This team was perfect for me to play with because it is a group of women that just come together to have fun and get out on the field. The team is coached by two men named Eamonn and Brian, who were both so nice to let me train with them and learn the game! The first night I went out, I was thrown right into the mix and we just played a match. I played mid-field (I really just ran around everywhere because I wasn’t really sure what that position meant), and it turns out I wasn’t too bad! The women were all so nice and fun to be around – they definitely know how to enjoy it. Afterwards, I was invited to join the team and coaches for tea/coffee and buns from Highland Bakery, which is their sponsor. The owner of the bakery was there to present new tops for the ladies, too! I was so appreciative of the opportunity to try something new and be a part of such a nice group of people. They were all so welcoming, I couldn’t wait to go to the training session the following week! (I was even invited to get in the team picture below) 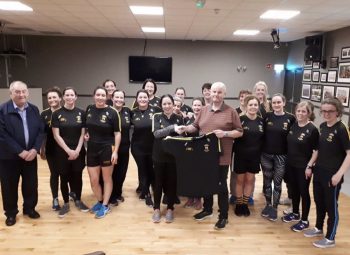 Unfortunately, I can’t play in real matches with the team because you have to be at least 25, but I’ve really enjoyed the couple of training sessions I’ve been to and will definitely continue to go when I can until their season is over (which is soon, sadly). And who knows…once basketball season is over, maybe I’ll pursue Gaelic and really go for it!

If you are going grocery shopping in Ireland and have eggs on your shopping list, you won’t find them in the refrigerated section like you would in America. You’ll actually find them on shelves in a different aisle (i.e. the bread or baking aisle)!

I still keep them in the fridge whenever I buy them though…(Is there a proper way to store eggs???😅)