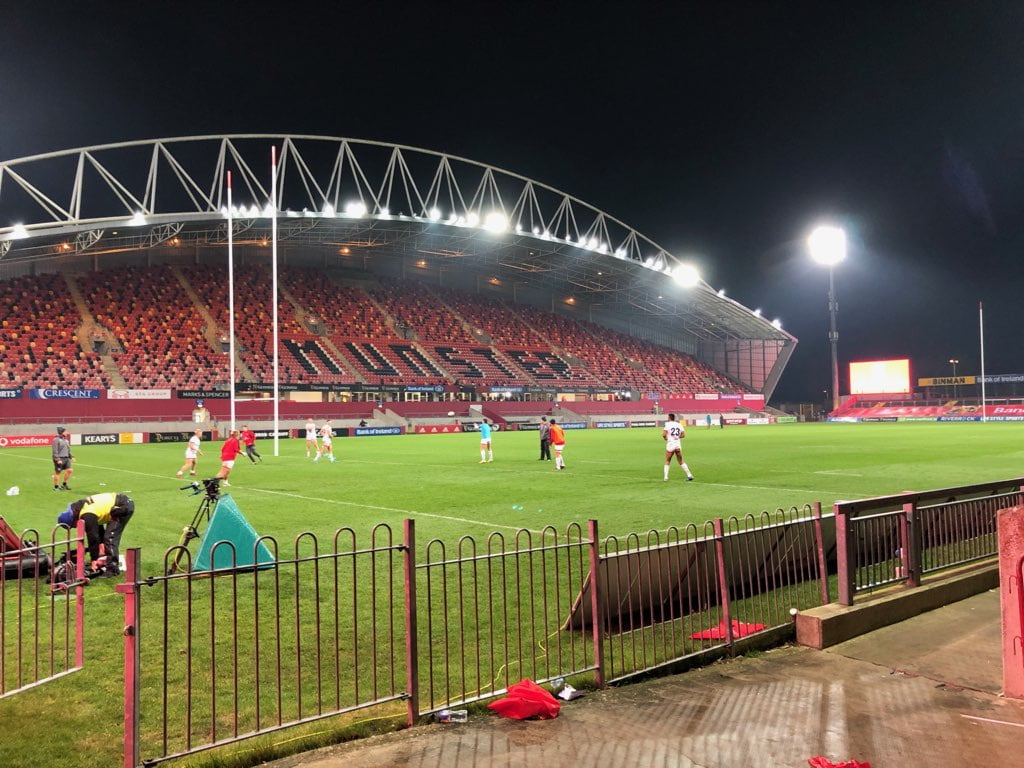 So if you’re at all familiar with me, you know I am, like many others who live in my area, I diehard Ohio State football fan. However, this past Saturday, instead of keeping up with the Buckeyes (who are hands down the best team in college football this year) I had the opportunity to take in my very first rugby match. This entire opportunity was possible by those at Limerick IT, but primarily by the one and only Wayne Fanning.

The match Ian and I took in was Munster vs. Ulster. Prior to the match beginning, we were able to take enjoy a dinner and complimentary drinks, as part of the hospitality that was included with our tickets. We had the opportunity to chat with some lovely people, who talked about the history of Munster Rugby, as well as some insight into how the game is played and some key players to watch.

As the match began, Ian and I began to take how the sport was played. While I still have a number of questions about the sport, here’s what I understand: Rugby is played with 15 on the field for both sides at the same time. The layout of the field seems somewhat similar to an American football field as there is one goal post at each end, as well as the equivalent of an endzone at each end. The primary way to advance the ball is to shovel it backwards to your teammates, and try and find a crease to run through the oppositions line of defense. If you have the ball and get tackled, you must shovel the ball between your legs to a teammate. While this is happening, the other team cannot interfere with the ball. If you make it to the other team’s endzone, it’s called a try, and worth 5 points. Similar to American football there an extra point sort of kick that occurs and must go through the uprights. If it does, it’s worth an additional 2 points.

Now here’s where things get fuzzy: There’s an additional way to score called a penalty. If the other team commits some sort of penalty, a player from the non-committing team gets a free kick from somewhere on the field (maybe where the penalty happened? I don’t really know). This kick is uncontested, and worth an additional 3 points.

Okay so more on this whole free field goal thing. I have two pretty big issues with this. First of all, let’s say Munster committed a penalty, and Ulster got a free field goal kick and made it for 3 points (This actually happened a couple times). When talking about what just happened, you would say it was Ulster’s penalty, which resulted in the 3 points, even though Munster committed the initial penalty. So if Munster commits a penalty and Ulster scores as a result, it would be said that it was Ulster’s penalty. Confused? So am I.

My second issue is what happens during a free field goal kick. Regardless of what team is lining up to take the kick, the entire stadium goes quiet. I mean like dead silence. Like Ulster was getting ready for one of these kicks and people in the Munster crowd were shushing people so there would be no noise. Like seriously? Imagine that team from up north (If you know you know) coming into Columbus, lining up for a field goal, and the entire crowd going dead silent. Hasn’t happened yet and should never happen in my lifetime. So is this silence an act of sportsmanship to not distract the opponent? Cause if so then I’m almost at a loss for words. Hopefully there’s another reason this happened. Maybe it was a one-time thing because in fairness that’s the only rugby match I’ve ever fully watched.

In all seriousness though, the game was a ton of fun. Ian and I learned a lot, met some great people, and had a great time. Luckily enough, Thomond Park, where Munster plays its home matches, is literally a 1 mile walk from our apartment. If I have any say in it, it won’t be the last rugby match we go to this year.

Thanks for reading! Tune in next time as I share a phenomenal story about….you’ll just have to wait and read! 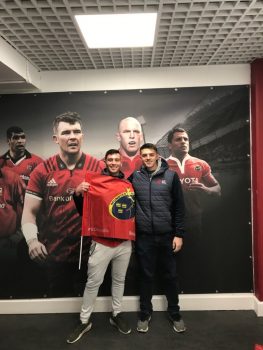