A Brilliant day of Basketball for Belfast at Day 2 of the Belfast Classic! 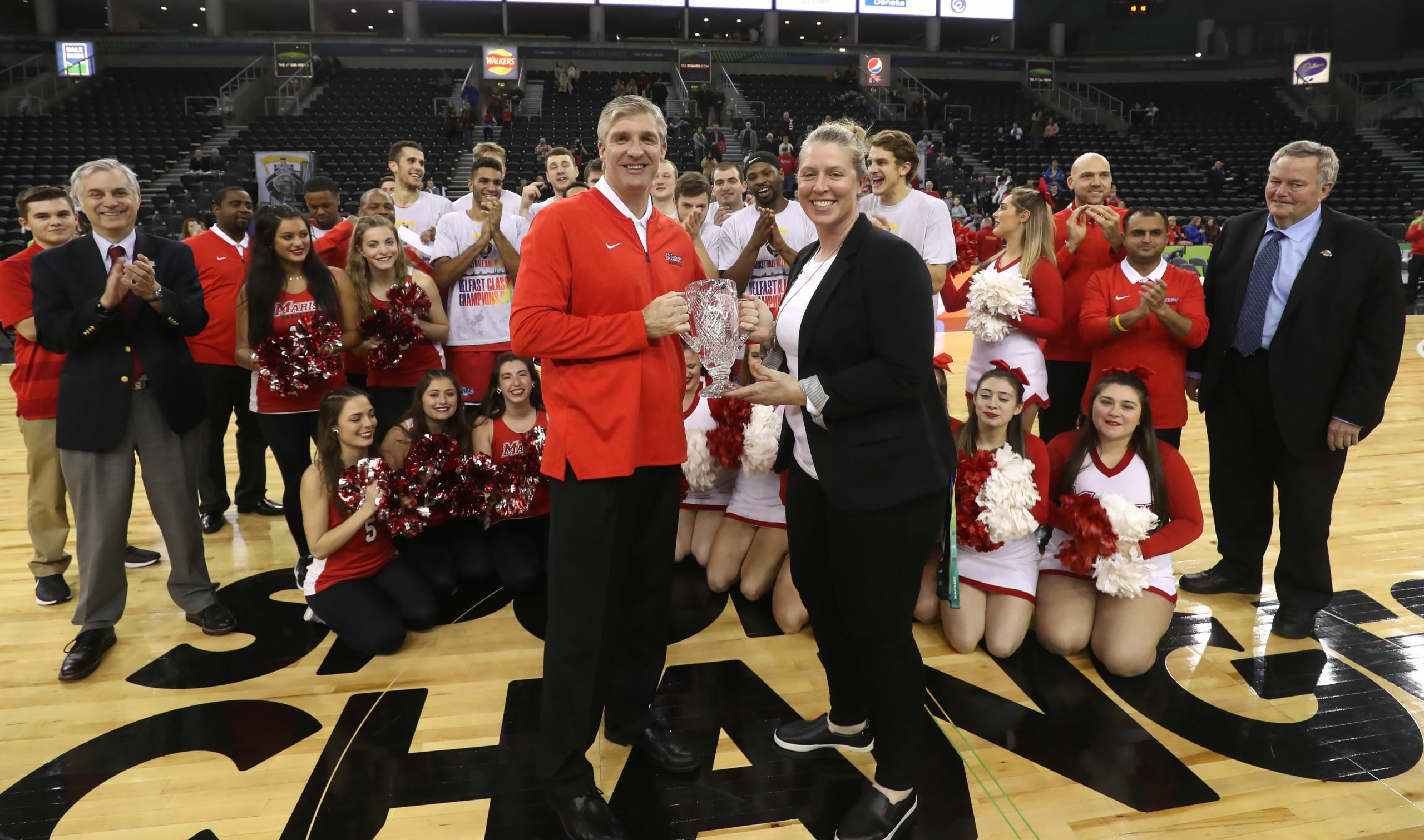 Day two of the Basketball Hall of Fame Belfast Classic saw basketball fans overtake Belfast’s SSE Arena once again on Friday 30thNovember to witness an exceptional level of NCAA college basketball played live in the only tournament held in Europe. Now in its second year, the three-day tournament has been brought to Northern Ireland through a partnership with the Sport Changes Life Foundation, Naismith Memorial Basketball Hall of Fame and the Metro Athletic Conference (MAAC).

Yesterday, the opening games of the tournament saw Marist College and University at Albany from the Samson Bracket named victorious, with both teams then going head to head earlier this evening with only one being able to claim the first of the Belfast Classic Cups. The Samson Bracket Consolation Game was a great beginning to the gameplay for fans this evening and saw Dartmouth College steal the win from Albany by 14 points. However, tonight’s finale Samson Bracket Championship Game kept the whole SSE Arena on the edge of their seats throughout each of the four fast paced, energetic quarters which resulted in the Metro Atlantic Athletic Conference’s Marist College being named Samson Bracket Champions and awarded the first Belfast Classic Cup of the 2018 tournament. Speaking on their team’s victory, Head Coach John Dunne said, “We’re really excited about the win. I know we controlled the game from start to finish…the guys played with great passion and desire and poise. The finish could have been a little cleaner but at the end of the day winning any kind of tournament is a majorly positive. We’re really happy…and we had some fans here in Belfast that we put some smiles on their faces. We have a great fan base.”

In addition to the Samson Bracket Finals, this morning also saw the opening games from the teams in the Goliath Bracket. Gameplay began with University at Buffalo going head to head with University of Wisconsin – Milwaukee, followed by University of San Francisco and Stephen F. Austin State University battling it out for the all-important wins in Goliath Bracket round one. The Buffalo Bulls secured the first spot in the Goliath Finals Championship Game by beating University of Wisconsin – Milwaukee by a comfortable 21 points after a hard-fought game of basketball.

Later in the afternoon the second and last spot in the Goliath Championship Game was secured by University of San Francisco, who sailed to victory with a 76-58 score against Stephen F. Austin State University’s Lumberjack team.  Discussing his team’s victory, Head Coach / Captain said, “It was a great effort on our guys’ part. Stephen F has had a lot of success with their program. I know right now we are playing pretty well. We just take it day by day, possession by possession. This group has some special leaders and that’s what it takes to get to that level. It takes leadership and caring for one another, and we’ve got that.”

Marc Mulholland, Executive Director of the Basketball Hall of Fame Belfast Classic remarked on the second day of outstanding, high-scoring games, saying, “I’m delighted that the Tournament has been a resounding success so far, with gameplay today even more impressive than yesterday! It’s great to see such an enthusiastic turnout of supporters from around the world over the last two days and we only hope tomorrow’s Goliath Bracket Finals attract even more visitors to the SSE Arena to experience an extraordinary level of college basketball!”

Tomorrow, Saturday 1stDecember, will see the Basketball Hall of Fame Belfast Classic come to an end for another year, with the Goliath Bracket Finals gameplay beginning at 1.00pm as Stephen F. Austin State University and University of Wisconsin-Milwaukee fight it out in the Consolation Game. Following this, the tournament will reach its pinnacle for the weekend with the final game featuring the University at Buffalo Bulls and University of San Francisco Dons, which will be a game not to be missed for local spectators as well as those tuning in from America via CBS Sports Network.