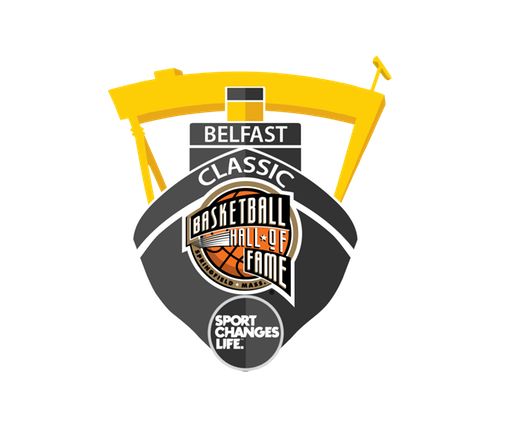 Springfield, MA – The Naismith Memorial Basketball Hall of Fame announced today the field of teams for the first-ever Basketball Hall of Fame Belfast Classic, a college basketball tournament held in conjunction with the Metro Atlantic Athletic Conference, Sport Changes Life, Rory McIlroy’s Foundation, the Rory Foundation, and The SSE Arena, Belfast. The two-day tournament held on December 1 and 2, will feature Holy Cross vs. Manhattan College and La Salle University vs. Towson University, followed by consolation and championship play on the second day.

As previously announced, the Basketball Hall of Fame has partnered with Sport Changes Life, a registered UK charity and US nonprofit organization that works in disadvantaged communities to help young people find a path to a brighter future with the help of international student-athletes. The Basketball Hall of Fame, in combination with the Metro Atlantic Athletic Conference, aims to support this cause by extending their reach across the Atlantic. Rory McIlroy and his Foundation will also join the cause. In addition, Aer Lingus will be the official airline carrier of the tournament.

“We are very excited to host our first-ever international event in Belfast,” said John L. Doleva, President and CEO of the Basketball Hall of Fame. “Teaming up with Sport Changes Life provides an excellent opportunity for these collegiate athletes to compete abroad while learning about another culture and making a positive impact in the lives of local youth.”

“This is an historic event for everyone involved and Sport Changes Life are delighted to be in partnership with the Basketball Hall of Fame and our friends at the Metro Atlantic Athletic Conference to bring this level of basketball to the island of Ireland. Our journey began in Sport Changes Life with our founding partners Ulster University and Chaka Travel when we worked together to help raise the aspirations of young people through our Victory Scholar and EHOOPS programs. We have grown and are now privileged to be working in partnership with the Rory Foundation. We are delighted to be building on these partnerships with others such as Aer Lingus, Velocity Worldwide and Belfast City Council as we work together in creating a brighter future for our young people. Through this prestigious event we are certain that we will inspire generations of young people in our quest to help change lives through sport.” Said Sport Changes Life CEO Gareth Maguire

In addition to the Basketball Hall of Fame Belfast Classic, a series of ongoing community relations events and initiatives will be held in the Belfast vicinity. Formal announcements surrounding specific events and ticket information will be released at a later date.

“The MAAC values the relationships it has developed with the Basketball Hall of Fame and the Sports Changes Life Foundation. Both groups have missions that the MAAC membership strongly supports and has driven the league’s involvement with their activities here in America and in Northern Ireland. It was natural progression to bring the two groups together and develop a basketball tournament that would highlight the positive academic and athletic activities of the partners, and I want to thank Manhattan College for agreeing to be the first MAAC team to play in the Basketball Hall of Fame Belfast Classic.” – Rich, Ensor, MAAC Commissioner

“The Hall of Fame Belfast Classic will feature a strong field and the games will provide our program with a tremendous challenge next season. We are excited to participate in this event, and to provide our student-athletes with the educational experience of traveling abroad.” – Bill Carmody, Holy Cross

“It’s an honor to be in the first NCAA basketball tournament in Northern Ireland. It will be a great trip for our players and fans. It’s especially nice to take Cian Sullivan back home where his family and friends can see him. Competitively, we will have challenging neutral-court games against good teams. Hall of Fame Belfast Classic is a tremendous addition to our non-conference schedule.” – Dr. John Giannini, La Salle University

“We are extremely excited about the opportunity to play in this inaugural event with the prestigious Basketball Hall of Fame. We look forward to proudly representing the college in Northern Ireland.” – Steve Masiello, Manhattan College

“We are excited and honored to participate in such a great event. This is an incredible educational opportunity and a once in a lifetime experience. Basketball is just one component of our student-athletes’ experience here at Towson. To have the chance to experience the culture and learn about another country is something they will remember for a long time. It’s also great to play against some quality competition that will help us prepare for our conference schedule and assist us in reaching our team goals.” – Pat Skerry, Towson University

About The SSE Arena, Belfast:

The SSE Arena, Belfast is Northern Ireland’s premier entertainment venue. The venue opened in December 2000 and to date has welcomed over 9 million visitors. This world-class arena can stage a number of sporting events with an Olympic sized Ice pad and is home of the Stena Line Belfast Giants.

Not only providing a multitude of sports, the Arena attracts international stars from the world of pop, rock, hip-hop and classical music and has welcomed stars such Beyoncé, Adele, U2, Rhianna, Lady Gaga, Michael Bublé, Rod Stewart, Black Sabbath and many more. The venue has hosted BBC Sports Personality of the Year and the MTV EMAs.

The Arena has seating capacities from 1,500 for an intimate theatre format right up to full capacity format of 10,800. The SSE Arena, Belfast provides an outstanding location for first class corporate hospitality to businesses in Northern Ireland. The Arena has 24 corporate hospitality suites comprising of 20 x 12 seated suites and 4 x 28 seated suites.

About Sport Changes Life: The primary goal of the Sport Changes Life Foundation is to provide an opportunity for raising the aspiration of young people on both sides of the Atlantic so that they can live out their dreams and guide them as sport changes their lives. We are a sports foundation built on inspiration, hope and victory. SCL works in disadvantaged communities to help young people find a path to a brighter future with the help of our international student-athletes, the Victory Scholars. In February 2016, SCL formally partnered with Rory McIlroy charity the Rory Foundation, as both foundations strive together to help change the lives of young people on the island of Ireland and beyond.

Aer Lingus is the national airline of Ireland, founded in 1936. It operates 62 aircraft on routes across Europe and North America carrying 12 million guests per annum. Aer Lingus’ mission is to be the leading value carrier operating on the North Atlantic. It is the only airline operating between the United States and Ireland, which has a 4-Star rating (as awarded by Skytrax, the international air transport rating organization). Aer Lingus is a member of International Airlines Group (IAG), one of the world’s largest airline groups.

For more information on the Sport Changes Life Foundation: