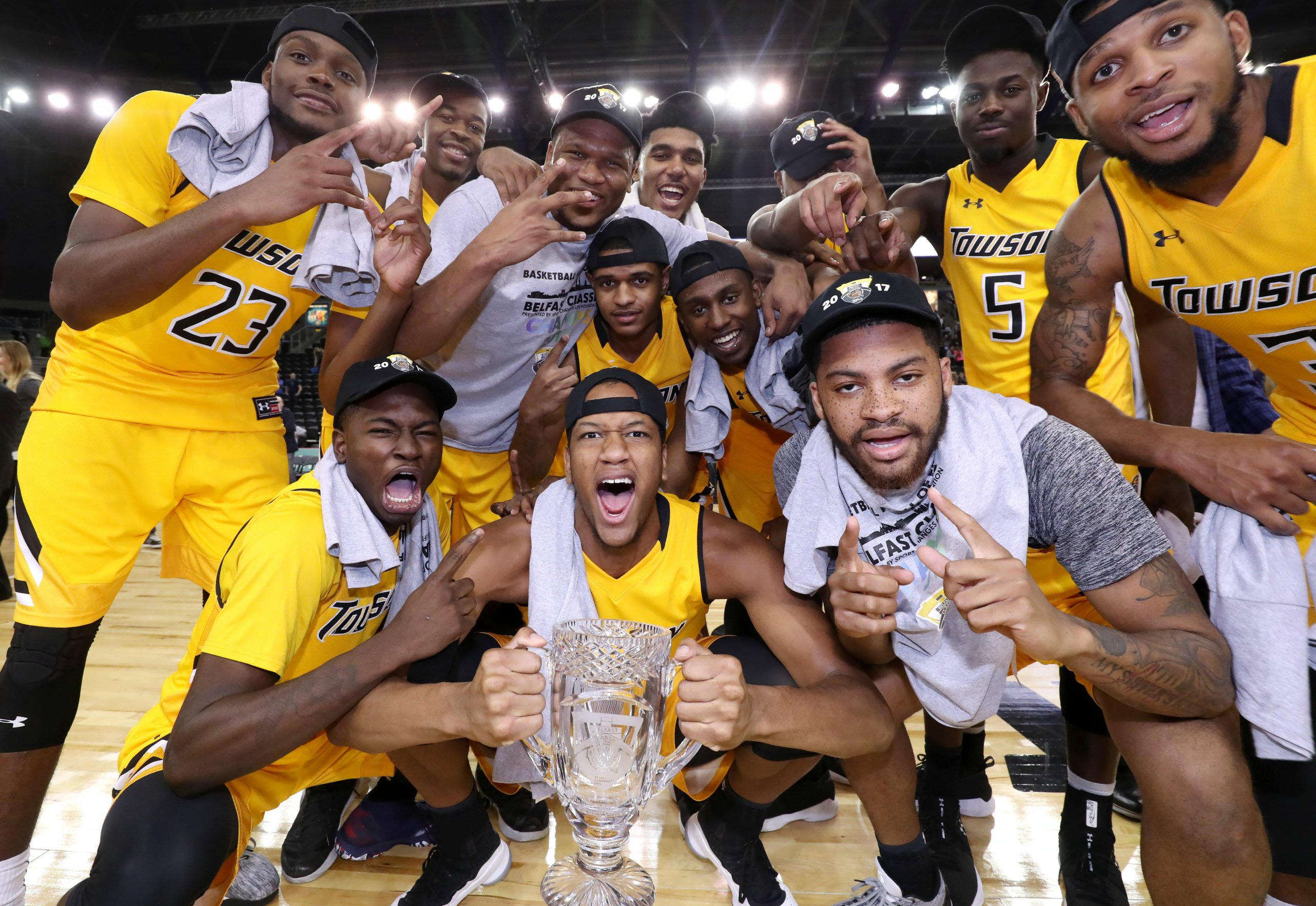 Basketball enthusiasts from across Ireland, Britain and further afield were treated to jam-packed sporting action today as the final day of the Naismith Memorial Basketball Hall of Fame Belfast Classic culminated with the Championship final between Towson University and Manhattan College.

Brought to Northern Ireland through a partnership with the Sport Changes Life Foundation, Naismith Memorial Basketball Hall of Fame and the Metro Athletic Conference (MAAC), the two-day Tournament presented some of top basketball athletes from four well-known American sporting universities through a series of competitive basketball games this weekend at the SSE Arena.

Keeping fans on edge to the last buzzer, La Salle University and the College of the Holy Cross commenced the second day of games with four energetic quarters of game play which resulted in a final score of 58-54. Commenting on his team’s win, La Salle Head Coach John Giannini said, “Holy Cross gave us everything we could handle.  We were very fortunate to win the game.”  Expanding on the warm reception felt by La Salle in Northern Ireland, Giannini added, “My family has been here three times, but this is my first [trip].  I can see why everyone loves the country.  We’ve been treated in a spectacular way and you have lived up to all the hospitality and fun the country is known for.

Concluding the event, which saw an attendance of over 9,000 basketball supporters, Towson University and Manhattan College battled it out for the tournament’s overall championship title, providing local fans with some quality, heart-stopping passes and shots and a final score of 56-55 Sharing his thoughts on his team’s victory and time spent in Northern Ireland, Towson Head Coach Pat Skerry said, ”This is the closest thing that I’ve been a part of that simulates a conference tournament that you’d experience in March with great, enthusiastic crowds, and unbelievable facilities.  The city of Belfast is awesome and we could come back in a heartbeat!”

As the first of its kind NCAA competitive collegiate basketball tournament to take place in Europe, the two-day tournament featured teams from four well-known American sporting universities from the USA including Manhattan College, the College of Holy Cross, La Salle University and Towson University and attracted thousands of basketball fans from near and far.

Marc Mulholland, Executive Director of the Basketball Hall of Fame Belfast Classic added, “I’m delighted to say that the Tournament has been a resounding success. The great competitive action, sportsmanship and fantastic atmosphere displayed here this weekend is the exact reason why we set out to do this in the first place. The tournament offered something Belfast has never seen before and I’m sure has sparked the interest of some new basketball fans!”

About the Basketball Hall of Fame Belfast Classic: The Naismith Memorial Basketball Hall of Fame Belfast Classic presented by SCL and its partner the Metro Atlantic Athletic Conference (MAAC) will field four US college men’s basketball teams for the first-ever Basketball Hall of Fame Belfast Classic.  This first-of-its-kind college basketball tournament held in conjunction with the MAAC, Sport Changes Life, Rory McIlroy’s Foundation – the Rory Foundation – Aer Lingus, Belfast City Council, Velocity World Wide and The SSE Arena, Belfast, is a two-day tournament held on December 1st and 2nd and will feature Holy Cross v. Manhattan College and La Salle University v. Towson University, followed by consolation and championship play on the second day.  The event is powered by Darius, Velocity Worldwide’s customer engagement technology to create an experience like no other for the fans attending the unique event.

About Sport Changes Life Foundation: The primary goal of SCL is to provide an opportunity for raising the aspirations of young people on both sides of the Atlantic so that they can live out their dreams and guide them as sport changes their lives.  We are a sports foundation built on inspiration, hope and victory.  SCL works in disadvantaged communities to help young people find a path to a brighter future with the help of our international student athletes, the Victory Scholars.  In February 2016, SCL formally partnered with The Rory Foundation as both foundations strive together to help change the lives of young people on the island of Ireland and beyond.