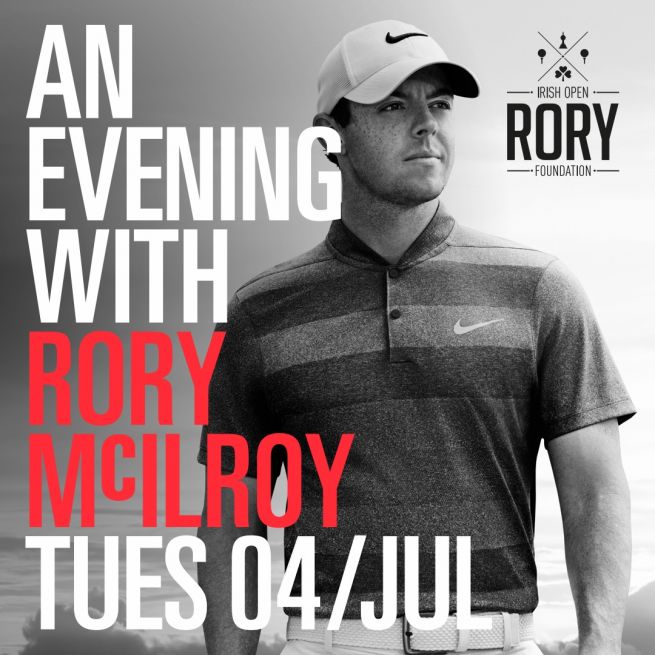 All ticket sales will go to the Rory Foundation

World number 2 Golfer Rory McIlroy and the Rory Foundation have announced they will kick off the week of the Dubai Duty Free Irish Open by hosting a charity Evening with Rory at the Belfast Waterfront. The event will take place on Tuesday, 4th of July at 7pm and all ticket proceeds from the evening will go to the Rory Foundation.  Award-winning Actor and star of Cold Feet and Lucky Man, James Nesbitt, will act as MC for the evening. The special guest will be announced at a later date.

“Coming home to Northern Ireland is always great, no matter where in the world I’ve been. To play golf in front of a home crowd is really special and I’m looking forward to an enjoyable evening at Belfast’s Waterfront Hall. If last year’s event in Dublin is anything to go by, it will be one of the highlights of my year. It was an excellent night’s entertainment with myself and Sir Alex Ferguson being interviewed, and occasionally grilled, by Jimmy Nesbitt. But more importantly than that, we raised a substantial amount of money for my Foundation that really benefited a number children’s charities – at the end of the day, that’s why we’re doing this,” said McIlroy.

The Rory Foundation was established in 2013 to help children live better lives, to raise funds and offer support to children’s charities with a special meaning and purpose for Rory. Beneficiaries of the Rory Foundation so far include the Cancer Fund for Children, Mencap NI, Sport Changes Life, all based in Northern Ireland, and Barretstown, the Jack & Jill Foundation and LauraLynn Children’s Hospice, all based near Dublin. Sport Changes Life will be the primary beneficiary of this year’s Dubai Duty Free Irish Open. Sport Changes Life work in disadvantaged communities in Northern Ireland to help young people find a path to a brighter future with the help of international student-athletes, the Victory Scholars. Other charities in the region who will also benefit, will be announced over the coming months.

“We raised a lot of money last year by hosting An Evening with Rory in Dublin and it gave fans a chance to get up close and personal with Rory. It was a great success so we wanted to replicate it in Belfast this year. We wouldn’t be able to do the work we do without the support of the public so thank you to anyone who has supported us in the past or who is going to purchase tickets to the evening,” said Barry Funston, Chief Executive of the Rory Foundation.

Tickets for the Dubai Duty Free Irish Open hosted by the Rory Foundation are available from http://www.dubaidutyfreeirishopen.com/